Having a good imagination is so great and really opens the door to whole new worlds. I go through fits and starts about worrying about the amount of TV the littles watch. It isn't on all day but neither is it limited to an hour a day. You feel bad when you hear about people that have banned the TV altogether but then not so bad when others have it on all day. Like most things in life I think you should do stuff in moderation and not feel guilty! For me the TV is great to keep them occupied whilst I need to start dinner or do something where they can't join in or help as there just isn't the room. I also put my hands up to using it sometimes to give me some peace for ten minutes so I can do something I want to do or just need some time out! We will sit and watch things together too and we'll talk about what's going on or join in with the counting/letters etc if it is something like Numtums or Alphablocks etc. Magoo is at the age now where he likes certain films and it has been really nice to sit and watch Toy Story or Cars with him and see how much he gets in to them. It certainly doesn't curtail his imagination afterwards either as he doesn't just reenact parts of the film he plays his own games with the different characters. Magee has an active imagination too and loves 'cooking' you things or playing cafes/shops with Magoo. 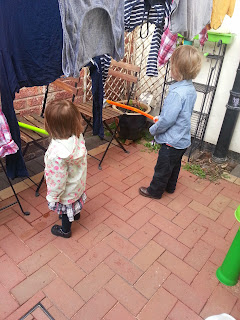 They made me laugh today as they went in to the yard and Magoo picked up part of his hotwheels track and asked me what pizza I would like! Magee copied and they were soon taking my orders and 'cooking' me up different pizzas with all sorts of elaborate toppings! The only pieces of equipment they had were the 'pizza peels' (a cricket stump and the track) and the 'ovens' (garden chairs), the rest was all made up! We had lots of different toppings including standard pizza express flavours with some added extras like cat crisps, strawberries and chocolate. Yes that was cat crisps! I determined that these were not made from cats or cat food but were cat shaped! Thank goodness!
Posted by Unknown at 12:34

I am a stay at home mum to the amazing Mr Magoo and the incredible Mrs Magee and I love it. I am grateful every day for my amazing husband and children and take nothing for granted so we try and make the most of it all. I decided to write a blog as a bit of a diary to look back on and remember all of the little sparks that make a day great and me want to write about it. Hopefully you'll enjoy reading it too!

We are in to attachment parenting, healthier living, trying to be more eco friendly, wooden toys, nature, education the list goes on!